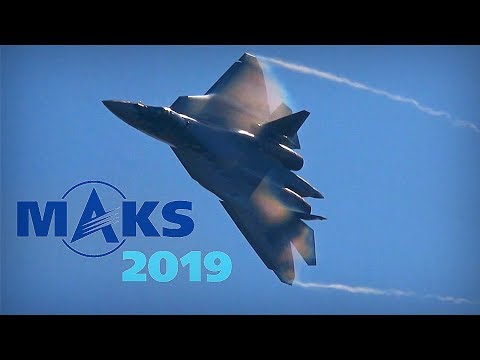 In the previous video we saw a different display by a different pilot that introduced many high-speed segments to which Bogdan's own performance adds up with unearthly, gravity defying and pretty aggressive post-stall maneuvers flown with masterful showmanship, taking advantage of the many features from this magnificient aircraft design.

Unlike in past MAKS editions, now we finally see the Su-57 being pushed closer to the limits of what the airframe is capable of, delighting the onnlookers with pure amazement.

Moreover, on August 27th, President Putin and President Erdogan met at the airshow to discuss a possible deal including export versions of the Su-35 and the Su-57. If Turkey ends up inking a contract to acquire any of these russian-made fighter jets, it will be a big deal for the russian aerospace industry. The negotiations are still developing.

The Sukhoi Su-57, previously designated T-50 (Сухой Су-57 / T-50) is a single-seat, twin-engine, stealth fighter aircraft with multirole capability but designed for air superiority and attack operations. This jet aircraft is the product of the PAK-FA (ПАК-ФА, Перспективный авиационный комплекс фронтовой авиации, literally "Prospective Aviation Complex of Frontline Aviation"), a fifth-generation fighter programme of the Russian Air Force. The first prototype performed the maiden flight on January 29, 2010. Deliveries of production aircraft to the Russian Air Force are expected to begin in 2018.

The fighter is intended to succeed the MiG-29 and Su-27 in the Russian Air Force and to serve as the basis for the Fifth Generation Fighter Aircraft (FGFA) while complementing the recently built fleets of SU-35S and SU-30SM. The initial production batch are to be delivered with a highly upgraded variant of the AL-31F engine, extensively used by the Su-27 family while a totally new turbofan jet powerplant is being designed from scratch.

The Su-57 has a blended wing body fuselage and incorporates all-moving horizontal and vertical stabilizers. The aircraft incorporates thrust vectoring nozzles and has adjustable leading edge vortex controllers (LEVCONs) that improve high angle of attack behaviour. The advanced flight control system and thrust vectoring nozzles make the aircraft highly maneuverable in both pitch and yaw, enabling it to perform post-stall maneuvers such as the Pugachev's Cobra and the Bell maneuver, along with doing flat rotations with little altitude loss. The aircraft's high cruising speed and normal operating altitude is also expected to give it a significant kinematic advantage over older fighter jet generations.

If you dearly enjoy my content, please consider supporting me on Patreon!
https://www.patreon.com/Airguardian